Notice: Trying to access array offset on value of type null in /home/customer/www/thedesignjones.co.uk/public_html/wp-content/plugins/slate-pro-admin/slate-pro-admin.php on line 964
 Reasons to: Round-up and elevator pitching - The Design Jones
Previous / All / Next

Reasons to: Round-up and elevator pitching

Written by The Design Jones 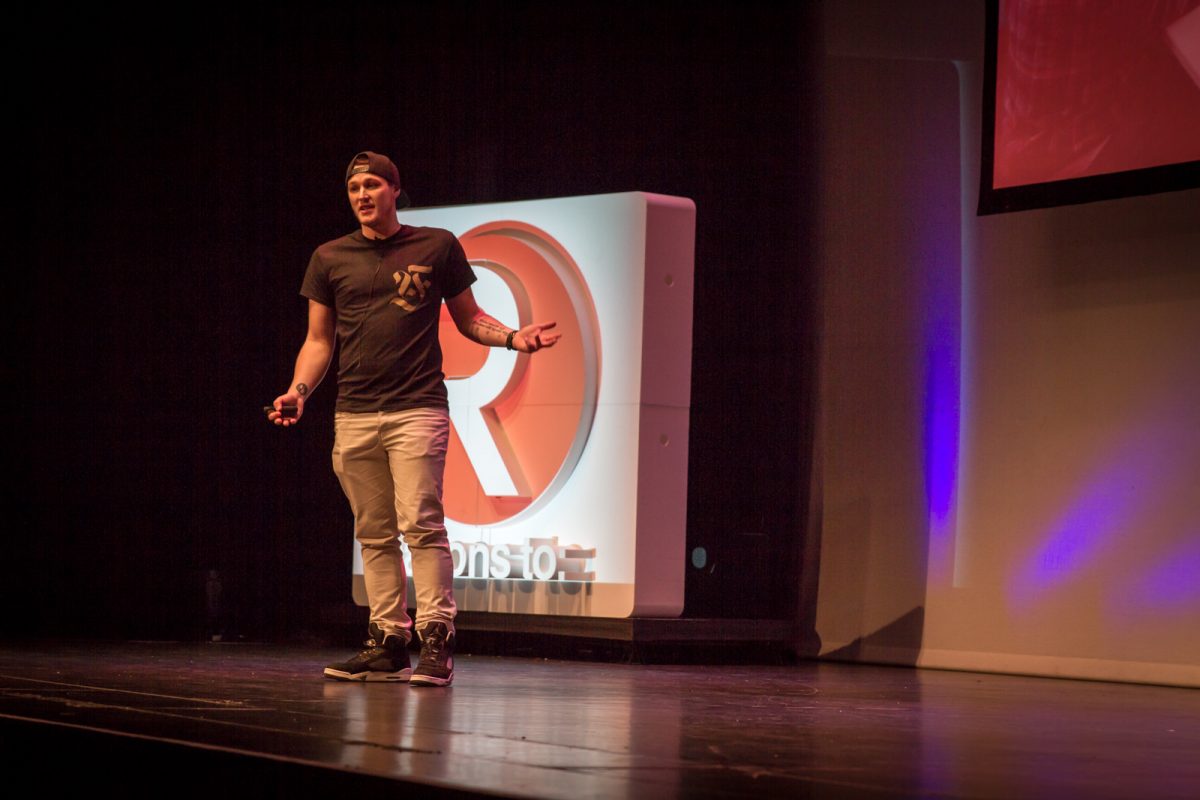 September 4 2016. Arriving in Brighton on a very grey day I check into my hotel and make my way down to the incredible Brighton Dome, the venue for Reasons to:. A conference that used to me known as Flash on the Beach. Formerly known as a tech influenced conference the name change has seen a shift to a creative focus. Featuring international speakers such as Stefan Sagmeister, Ben Newman, Gavin Strange, Seb Lester, Jared Tarbell and Yves Peters, Reasons to: is nothing short of incredible.

One section that is a unique feature and a real highlight is the Elevator Pitch. So many of us say ‘I could do that’ to a lot of things, but reasons gives up to 20 people the chance to grace the main stage, take 3 minutes, and give public speaking a go. You can’t just wander up though, you have to submit a proposal and be selected to take part. This means a win win for all involved, a great lineup in ensured for people to see and the process garners a prestige and exclusivity that means when you are selected, you really want to pull out all the stops. This year, for the second year, I would be taking part in this section.

We all arrive and get introduced to each other. We also get the first introduction to the three people (Andy, Chris and Amy) who will be looking after us for the next three days as well as the event organiser, John Davey. After the quick intro we are sent away to prepare for tech check tomorrow. September 5 2016. Day one of the conference and after spending the night tuning i’m still feeling relatively nervous about the whole thing. It is a daunting experience to get up in front of a packed main theatre and talk, let alone for only 3 minutes. With the Elevator pitch taking place in the morning of the last day you have plenty of time to soak up whats on offer and let that feed into your talk. The speakers at Reasons usually hang around the venue so you have the chance to bump into them and get some advice. The first session of the day that I caught was by Yves Peters. This one was particularly interesting to me as it was focused on typography and it’s development and integration with today’s programs. Yves covered a lot of the history of why certain programs UI for type is the way it is and delivered an extremely informative and motivating talk.

On to the next talk and this one is with illustrator Jim Stoten. Although this was his first big talk he handled it brilliantly, building up the audience all the way through. Jim has an incredible amount of love for his work and his talk felt very open and honest. After lunch the conference becomes single track and a packed theatre plays host to the excitable and energetic Gavin Strange. The crowd is usually quiet for this slot but Gavin certainly has the charisma to bring an audience to life.

After the penultimate talk all the Elevator pitchers gather on stage to go through all the tech requirements with the tech guy, Ritch. Last year this process took a while due to some special requirements like a drone but was fairly quick this year. The tech team at the dome are fantastic and precise, they have to be for the switching of equipment as there are no gaps between elevator pitches.

The final talk, an inspired session, is with no other than Stefan Sagmeister. I missed his talk at OFFF last year due to the main room being at capacity so this was my first time hearing him talk and he didn’t dissapoint. On the subject of beauty his talk was more of a University lecture. Well informed and researched it definitely felt more like a lesson than an inspirational talk, in a good way though. September 6 2016. Day two and the nerves and fear that comes with the elevator pitching starts to set in. Today is our first full run through, no restarts and no stops. In the morning I got to see a fellow Elevator pitcher from last year do his full talk, Mister Phil. Phil was a very deserving winner and had such a great story. As we don’t get to see the other Elevator pitchers talks, although you can hear them, it felt like a fresh talk for me. Phil was brilliant and funny throughout. Highlight was definitely the ‘Give good talk’ book that ran throughout.

I then had the chance to see Ben Newman talk, fantastic and as funny doing a talk as he is normally. Ben’s work is truly amazing but starting off with showing himself as a kid on a couple of TV game show’s was a brilliant touch and started his talk well. Ben also showed some of his new children’s book which looks great. I didn’t manage to catch the next two talks as I was going through my own but before we had our chance to practice I did get to see Mr Bingo do how thing on stage. Ever the showman and always funny he was brilliant. An intermission of kicking giant inflatable footballs into the crowd and general funny life observations made for one of the highlight talks of the event.

Our first run through. We get shown the process and how backstage is run. All of last years briefing starts to come back and I thought i’d be more relaxed, I actually became more nervous. Much further up the line this year, fourth, i’d get my talk done early. A lot races through your head before you even get to walking on stage and I think Reasons handles this well. The procedure of getting from behind the screen to the stage happens in a number of steps that allows you to gather yourself and mentally prepare for what you face. This is the session I remember being the hardest last year and it was again this year, particular because John is the only spectator and is making notes.

After the run through John gives us all some constructive feedback and some general stage tips. his background in Comedy and is general demeanour keeps us all relaxed and upbeat. The good news is we are all excited, the bad news, we have one more rehearsal, at 8am!

After running back to drop off my computer I manage to get back to the conference for the second inspired session with Jared Tarbell. I’d come across Jared in my old processing days, when I used to be heavily into coding, but had never seen him speak. Getting to see some of the code and the outcomes as well as his general work and story was brilliant. His calmness and talking style was a great cap to the day. September 7 2016. 8am and sleepily manage to get a hot chocolate and get to the venue a little early. As we make our way in the venue is extremely quite, very distant to what it will become in the next couple of hours. We all get a chance to go back through our talks and do a full run through, John is on hand to be the face in a sea of empty seats. At the end of this run through John gives us his final feedback and words of encouragement. ‘Night and day’ are his words to describe whats happened since we had practice number one yesterday. We head backstage and have time to chill out before the main run. As we sit calmly waiting the noise begins to get louder as more people venture into the theatre. Nerves are in full effect now. As we hear John take the stage he gives us all a huge intro, pitcher number one takes the stage and we’re off, no turning back now. When it comes my turn to take the stage, the Reasons to: lifeguards are there, as the were last year to give you those final words of encouragement, friendly faces before heading out on your own. I love the feeling I get when i’m on stage and this year was only better. I felt more comfortable, still as nervous, but much more confident. You can’t see much past the first few rows but you know the seats are filled. As you come off the stage, the adrenaline is incredible. Again the lifeguards are there to keep you calm and from shouting out in relief and excitement as others are doing their pitches. Once we are done we once again go on stage but this time all together and John gives us our farewell. It’s then up to the audience to decide if we go back.

The last session I caught was the Jam Session with Jared Tarbell, Mario Klingemann, Jon Howard, Ben Newman and Jim Stoten. This was a great, informal style set of talks with Ben Newman being my highlight from this. A very different topic from Ben that was inspiring, uplifting and overall an honest insight into how a certain project helped him with personal issues.

Spetember 8 2016. Back to normal after a fantastic few days. I really did enjoy every minute of Reasons to: 2016 and the whole Elevator pitch experience was, once again, something I won’t forget. I made some great new friends and gained great experience and I would encourage anyone to apply to do an Elevator pitch at some point. Everyone, even those how seemed too nervous or shy to put themselves in front of that many people did so with confidence and were brilliant.

As for myself, i’d love to be back up on that stage next year. Unfortunately it is out of my hands, hopefully I’ve done enough to be brought back but I do know that I gave it my all and enjoyed myself. I’ve gained great experience that I hope can lead into doing more talks at this scale or smaller. I’ve already had some great feedback and comments from people. Again, I can’t thank Andy, Chris, Amy, Ritchie for their motivation, help and guidance over the three days. Lastly but definitely not least by any means, thanks to John for allowing me 3 minutes of his fantastic conference for the second year in a row, 45 minutes next year? Here’s to Reasons to: and another fantastic event. Hopefully see you next year!